One year ago, one of Europe’s top 35 banks initiated a first ever collaborative investigation via AML Bridge.

While industry leaders the world over discuss how to make collaborative crime-fighting work in theory, our AML Bridge community has achieved this in practice. We’ve made secure and fully compliant fincrime intelligence sharing not only possible, but fully operational. And while our approach has been one of small steps and constant incremental improvement, with this milestone in mind it’s worth reflecting on how far we’ve come so far.

AML Bridge: how it started

On 13 July 2021, a crime-fighter from Swedbank sent a request for information (RFI) to a colleague from Luminor relating to a fraud investigation. Only a handful more collaborations followed that month, as banks integrated the new platform into their existing working processes. Quickly though, we saw usage increase dramatically.

An inquiry-a-day in August turned into 4-5 per day in September. That doubled again in October, and fast forward to June 2022, financial institutions were initiating more than 350 investigative collaborations a month.

In one year, the AML Bridge network has helped financial institutions resolve 2,750+ investigations – across anti-money laundering, fraud/scam or sanctions use cases, and in record speed. 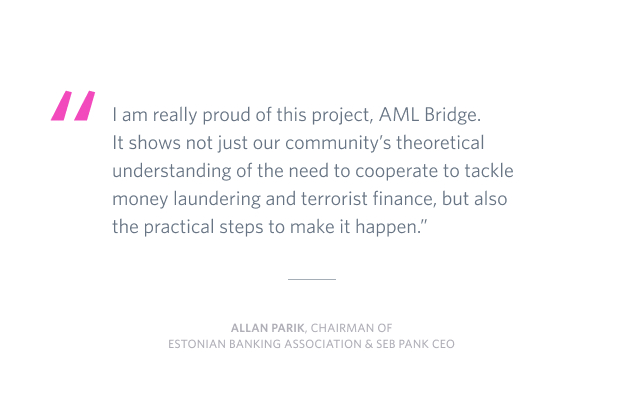 AML Bridge operates on the principles of private-private information sharing.

Historically, response times of 24-48 hrs to RFIs between financial institutions has been the rule not the exception – with processes for intelligence exchange often ad hoc, informal or insecure. Via AML Bridge we’re seeing banks improve the speed of correspondence by 100-150x with investigations being resolved in as little as three minutes.

Since the introduction of “urgent” classification case management (often referring to fraud/scam investigations where the speed of response can prove critical to successfully recalling funds) the median response time across AML Bridge has been 19 minutes. 75% of all urgent requests are answered in under an hour – one in four cases are resolved in fewer than seven minutes. 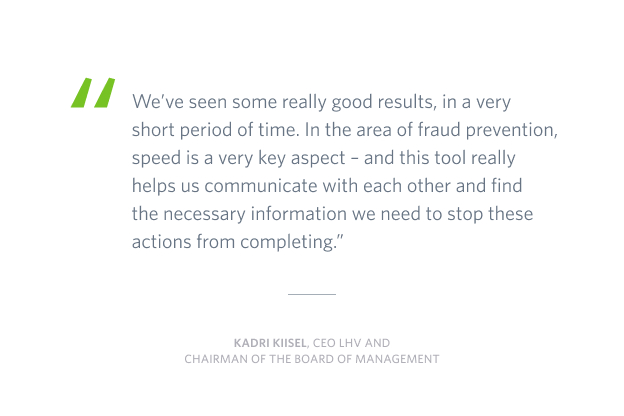 With AML Bridge, you can tackle financial crime at record speed.

From that first correspondence between two banks, within four months the AML Bridge network had expanded to four banks, then eight, and then 10 – representing 99% of the Estonian banking sector.

And at the start of summer, something truly pioneering took place – AML Bridge hosted its first cross-border intelligence exchange.

As Europol’s 2021 Serious and Organised Crime Threat Assessment report details, 7 out of 10 major criminal networks are operational in 3+ countries. Which means no matter how useful nation-based intelligence collaborations are, to seriously impact rates of criminality we need to be exchanging intelligence across borders and across legal jurisdictions.

With financial institutions based in the UK, Sweden and Estonia, AML Bridge is Europe’s first fincrime intelligence sharing network – that’s operational across borders, solves multiple use cases, and facilitates messaging in near real-time. Not a bad achievement in just one year!

Over the past year, in fraud/scam use cases alone Salv estimates that AML Bridge has successfully recalled or prevented €4-5m of customer money from reaching criminal-controlled accounts. As we know from the global statistics though, this remains a drop in the ocean – the task ahead of us remains massive, and this fact motivates our team to press even harder in year two to increase AML Bridge’s crime-fighting impact.

AML Bridge: the future ahead

There are a few factors that make us optimistic about crime-fighting in 2022-23. Just this month, the Financial Action Task Force (FATF) released a major report into collaborative crime-fighting, featuring AML Bridge as one of the world-leading initiatives in this area.

Since then our phones have been ringing hot – banking associations across Europe are reaching out to Salv to understand how we’ve built a platform that is secure and fully compliant across 27 (+1) EU member states.

Salv is also in the process of locking in some very exciting collaborations, which will help expand AML Bridge’s coverage – across European markets and beyond. But we’ll announce these properly, in good time.

From a product perspective we’re always looking to improve AML Bridge. Already the Estonian banks who helped pioneer our basic RFI messaging capabilities are exploring a new Forum function – a secure internal conversation space for crime-fighters to share and discuss emerging threats and typologies, as well as best practice response / solutions to these.

We continue to validate suspicious IBAN sharing – enabling members to proactively warn others within the network of serial bad actors. And we’re expanding automation across various use cases to continue to improve speed and reduce manual handling.

As always, a huge thanks from the team at Salv goes to our forward-thinking partners in Estonia – the passionate crime-fighters who saw how broken compliance can be and refused to accept this as business as usual.

We are constantly inspired by your drive to do more, do better, and do it all faster. As global industry leaders continue to point towards collaborative crime-fighting as the way forward we look forward to many more banking leaders picking up this torch, in jurisdictions across Europe and beyond. Because it is only through the strength of a network that we’ll begin to produce meaningful impact – not just in our backyards, but everywhere.

Read our latest white paper and learn how AML Bridge can rejuvenate your organisation’s compliance.