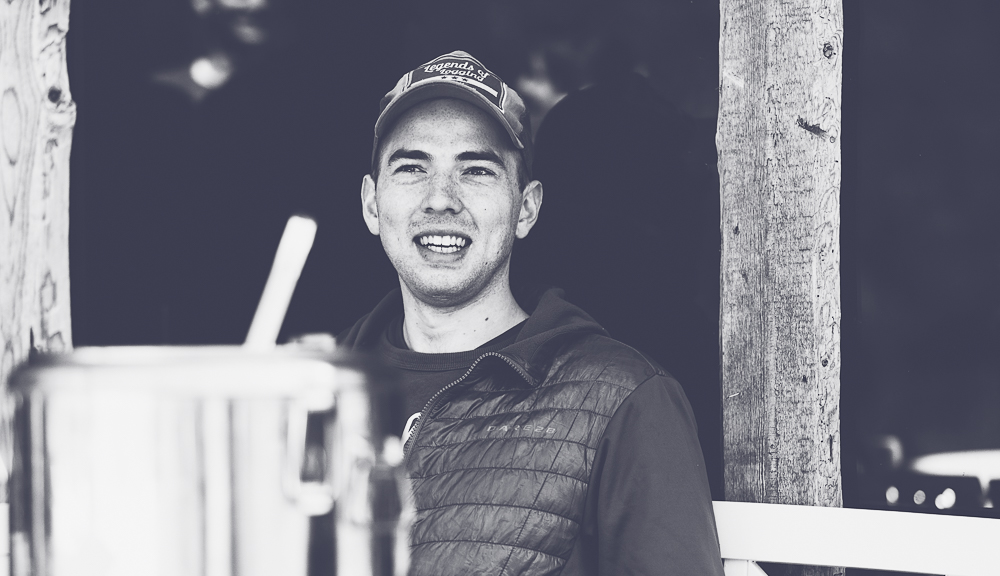 Rando, how would others describe you?

An enthusiast. A positive person. Someone with hobbies — at least that’s how they would have described me before my partner Juta and I had a son. He’ll be 2 in autumn and I can proudly say that he’s now my main hobby.

Once your son is a little older, what hobbies will you go back to?

Mountain biking and beach volleyball. I used to do volleyball more often. Picked up biking right after my son’s birth and had a chance to do it a few times a week but, now, that isn’t really the case. I can’t really bring him with me.

Which city is the best, Tartu or Tallinn?

Võsu. Maybe I’m biased. I claim to be from Võsu, but honestly most recently I’ve lived in Tartu. Every other week I try to go back to Võsu, even though we live in Tartu. In the summer, though, we often just live in Võsu. The sea just calls to me, but Juta is from Tartu, and I’ve really started to love it here, too. In Võsu, for 5 years I was a lifeguard like in Baywatch — I loved it.

Oh, you were a lifeguard. Did you end up picking up ladies?

No comment. I love Juta with all my heart.

What’s your favorite season in Estonia?

Spring because everything starts to bloom. And also, I have a birthday in Spring. So that’s nice, too. Growing up, there was always the first week of warm weather and that was always during my birthday. Convenient for me. In Spring, nature starts to breathe. I love it.

How did you get your start in engineering?

I went to Nõo Reaalgümnaasium for high school where I was already into physics and mathematics. At the school we had a ton of engineer-minded persons, so I guess that’s where it all started.

Where were you before Salv?

I had an incredible job while I was an undergraduate in Uni — I was making high-end speakers at Bang & Olufsen. I was a hardware developer there, programming in C in the automotive part of the company. But, as I really started thinking about my future, I knew I’d need to make a change. Juta was studying in Tartu so I was travelling a lot between Tallinn and Tartu. So I started thinking about remote working opportunities so that I’d be able to be with her in Tartu. But remote working isn’t really a “thing” in hardware. So I decided to get a Masters in cyber security, which I did with Tartu University and TalTech. At the end I had a degree with both schools in digital forensics. It took me a few months to get my first post-Uni gig, but actually an old co-worker from Bang & Olufsen asked me to lunch and then invited me to Guardtime. I started working there because they had offices in both Tartu and Tallinn. And that’s where I started doing software development and integrations for different potential customers. You know, data-integrity related products.

By data-integrity products you mean hashing and stuff?

Yes. I was working as technical R&D manager researching projects in the EU with other companies. Inside Guardtime we decided we wanted to research some of the products and how we could improve them. We were working in cooperation with other companies — we provided the integrity part and they provided the function. As part of that, we were writing proposals for EU research calls. I did that for 8 months, and then realized at some point that I missed having a mission — we didn’t really have a bigger goal.

Is that how you decided it was time to move on?

Yes. When we were working on the EU research calls at Guardtime, it wasn’t that we were standing still, we were definitely moving forward, but I’d been at the company for over 4 years and needed something new. As I began evaluating my past, I noticed a strong mission was quite important, even if it didn’t seem important at the time. As I started thinking about it more, I realized even making small decisions in your day-to-day work is a lot easier if you have a mission. That’s when I started looking at what was out there. I started listening to some of the podcasts that gave overviews of the Estonian scene. I started talking to old friends. I had quite a few options, but I noticed Salv’s mission was more distinctive than others. To be honest, some of the other missions were kinda dull, and definitely not so ambitious.

How did you find out about Salv?

I think it was the Salv funding thing back in December and the TechCrunch article that came out after. I knew Laur Läänemets who had worked at TransferWise with all 3 of Salv’s founders, so I asked him some questions. He said he’d talk to Sergei [Salv’s CTO]. After he reached out, I went for lunch with both Taavi [Salv’s CEO] and Sergei. After that, I felt a lot more confident that I’d like to join just because of the problem they were solving and how they were approaching everything. I didn’t really get how big the problem was that Salv was solving until I talked to those two. Which means I kinda did the whole thing backwards. Instead of applying and then getting to know the problem and team, I got to know the problem and the team and then applied.

What’s different and what’s similar between Salv and your old work?

In Salv, we have clear vision and very fast feedback cycles with actual customers. That’s definitely clear. Before I felt so far away from the customers, and so it was hard to know whether what I was doing was making a difference. Previously, it was so hard to get feedback from actual customers, which made decision-making super tough. And it always felt awful when you’d build stuff and people would never use it — although there isn’t a lot you can do about that. But, in Salv, I can see that we build things based on intuition in addition to real customer feedback. We concentrate on a very set of problems and then narrow it down as much as possible so we can help concretely solve issues. It helps us not get so distracted by the more unimportant stuff.

Did you want to join a startup?

To be honest, I was scared to even consider a startup because I have a kid at home. I know the reputations startups have of eating all your time and destroying relationships. I was comfortable at Guardtime. I knew how everything worked. I felt confident. There, I didn’t need to do a lot of weekend work, but was afraid that would completely change if I joined a startup. But everyone I talked to in Salv assured me that wasn’t the case here and, after almost 6 months here, I would agree with them. At Salv, we work smarter, not harder. And working with businesses is different than working on something consumer-focused, the pace is much more manageable.

Do you have a lot of contact with customers?

Unlike I had in my previous work, I now have loads of contact with customers. Throughout some of my days I end up answering a lot of customer questions, so it feels like I’m taking care of them, too. And while, on occasion it feels overwhelming, overall I’m just really glad for it. It’s really refreshing to talk directly to them. That way, I can see what life is like on their side. I can see what we’ve built in action and find out how it affects their life positively or negatively. It’s nice there aren’t middle men, it’s way better this way. I come away every day feeling like my work has purpose because it’s actually being used.

That positive flood of emotions already hit me the first week when I had a demo call with Anu [Salv compliance guru] and saw on the call that the customer was super enthusiastic to use our product and mentioned the specific problems it would solve for them. It was a first-week euphoric high, “Wow, we’re actually solving problems for this company.” Now, today, many months later it’s a company I actually take care of so it was pretty special to see them as they progressed from introduction to now onboarding.

How would you describe the experience so far?

Thanks to Sergei [Salv CTO] and Ester [Salv’s product manager], it’s been really well organized. We have clear goals to achieve and if we see something is useless, then we’re free to speak up and then discuss it together. Sergei normally filters out some not so necessary stuff and helps us overcome problems if we have any. Also, it’s nice that in our 1:1s we can discuss not just everyday work-related worries, but just worries about life in general. I enjoy the fact that we have a fast feedback loop to discuss any problems or topics that need more discussions than a daily meeting. Basically, I just enjoy it.

How would you describe Salv as a workplace?

Salv is full of very warm people — it’s a warm team. That’s the thing I kinda missed at the end of my time at Guardtime when I was off working on external projects. At the beginning of my time at Guardtime, it was smaller, like a small family. So moving to Salv right now when it’s still super small means I’ve got that “family feeling” back. We can talk about any topic, we’re really close, regardless of what team or project we work on. And, to me, the impact of COVID was that we’re even closer. We had so many syncs and non-work calls to help us maintain that team feeling, which made distributed team members feel just as close to those who were in the same city. Now it feels normal that Taavet [Salv designer] knows about what’s going on in my day and I know about his. We’re that close.

Who would hate working at Salv?

It’s hard to imagine someone not liking working at Salv. But maybe people who like a boring life. People who don’t want to speak to customers. People who want to work alone in a cellar with some fancy equipment. In Salv, it’s not like that. People are motivated and are passionate about the mission. We talk to customers. We work as a team. You won’t just be able to get instructions and then go away and come back in 2 weeks, it doesn’t work like that. We define our OKRs as a team, no one tells me what to do. It’s not waterfall engineering. What we do is never decided by one person. We do it together.